Debt: a time bomb in the markets!

The rise of US equity markets in the nine weeks since the presidential election shows that investors approve of Donald Trump’s victory.

But virtually all commentators and analysts are ignoring a key measure that shows the extreme risk the markets are facing – and it’s one that worries us at Wealthwise.

It’s the extent to which US stock purchases are funded by margin debt, which will trigger margins calls when prices fall.There are two charts that we watch closely. 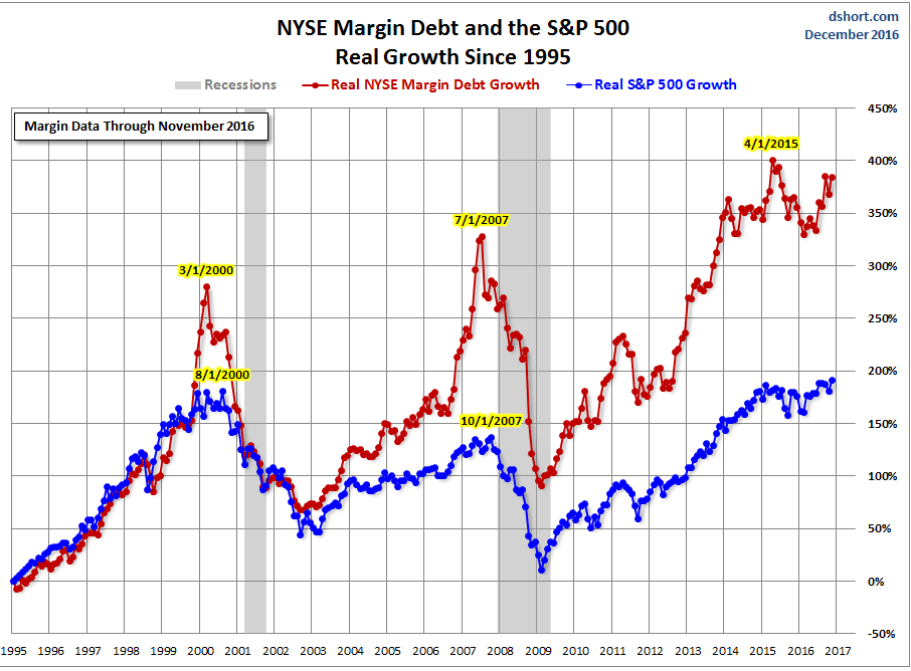 The first chart above shows that the level of margin debt against US equities is almost perfectly correlated with the S&P 500 index. Anyone can invest $10,000 in the US stock market online and immediately get another $10,000 to buy shares. So, you can buy $20,000 worth of shares for $10,000. It’s 50% margin or one-to-one leverage.

With US interest rates having been at record lows for eight years, many investors have borrowed money to buy stocks. It’s free money and when the stock market is on a bull run, why wouldn’t you?

Gearing magnifies your gains so with the S&P 500 up 26% in a year, one-to-one leverage doubles that gain. What’s not to love?

Well, it’s the second chart that worries us most. 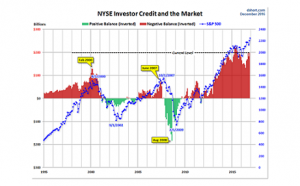 It shows the extent of margin debt at the peaks of the US market in the 2000s, and the opposite situation, the retreat to cash at the troughs of the market.

What this chart shows us is that the level of margin debt in the US market is hugely higher than at the market peaks in 2000 and 2007.

At the end of December, there was US$500 billion* in margin debt. If the market were to slip at all – if earnings growth disappoints, for example – there is half a trillion dollars worth of US margin loans that could start to be unwound.

At such a cyclical high in margin debt levels, that is our major worry.

The same situation is also a concern in the Australian market, where leverage is more extreme.

In Australia, most of the leveraged speculation in stocks is done through contracts for difference (CFDs) that offer leverage of 20 times, which is why CFDs have replaced much of the margin debt in Australia.

Clearly that level of leverage can greatly augment a capital gain on a stock price; but losses are also greatly increased. Leverage can be a very dangerous tool if not well understood and wrongly used.

Unlike the US market, which has well publicised margin debt figures, we do not know in the Australian marketplace the combined level of CFD exposure. The CFD providers are not obliged to tell us.

But we’re fairly sure that, with the greater leverage available, it’s big – and it’s just as scary as the US margin debt picture, if not more so.

It’s all good while the markets are rising but if the markets start to fall, the double-edged sword of leverage could be dangerous indeed.