Toppy US Stock Market is a Concern

Home » Blog » Finance » Toppy US Stock Market is a Concern

US Stock Market and Key Drivers

One thing investors should have learned this year, is not to get too caught up in following the predictions of the so-called experts because they can get it badly wrong.

When it looked earlier in the year like the world was heading into recession, Goldman Sachs was forecasting that iron ore – a proxy for Chinese economic activity, and thus for the health of the world economy – would average about US$35 a tonne for the year.Goldman Sachs also thought oil would average under US$22 a barrel.

The firm has just revised its iron ore expectations up to US$62 a tonne, and of course we now have oil above US$50 a barrel.

In fact, I’ve begun to use what Goldman Sachs says as a kind of ‘reversal indicator’: whenever it gets too bullish or too bearish on anything, I go the other way.

After Brexit and Trump, it’s almost the same with the political pollsters and expert commentators.

But here we are, dealing with the reality of president-elect Trump and the market reaction to that reality.

The greenback has been strong since the US election result, particularly on the back of Trump’s plans to coax multinationals’ overseas cash stashes back to the US. That narrative has been assisted by the widespread belief that the Federal Reserve is poised to lift interest rates in December.

But I’m not so sure. I think the US dollar is due for a pullback.

The Fed doesn’t want to see rising US bond yields at the same time as a rising US dollar so I wouldn’t be surprised to see the central bank’s Open Market Committee come out with some very dovish comments next week to try to pull back the dollar. Increasingly important as Trump’s spending plans are likely to create inflationary pressures.

We’ve become used to central bank intervention in recent years but I think the Fed is losing its grip over the markets – the bond markets are reflecting that.

Whatever the Fed says is not going to matter that much. The key driver for US stocks going forward will really be GDP Growth and company earnings.

Much of the health of corporate earnings will depend on what Trump does in terms of trade negotiations – whether he can rebalance the trade deficit for the benefit of US Corporations.

Now, while there are some good earnings numbers out there, overall I am not as optimistic about US corporate earnings as many other investors appear to be.

The problem I see is that optimistic earning assumptions are already built into stock valuations.

I saw a chart I recently on the ratio of the market capitalisation of US equities to Gross Domestic Product (GDP) as a percentage. 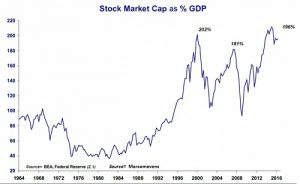 That’s an extremely bullish level of sentiment. Although the most recent GDP numbers were a little bit better than expected, earnings growth has really struggled over the last six or eight quarters in a row.

Analysts have kept lowering their forecasts, so companies have kept “beating” the market forecast.

To me, earnings are in a worrying trend. And that means that valuations also look concerning – particularly in the technology sector.

I don’t think the US stock market is in bubble territory but it certainly looks toppy.

It’s due for a correction but what type of correction remains to be seen.